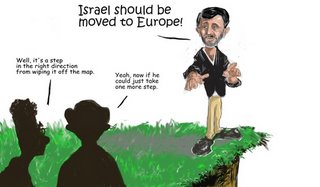 Much thanks to Daled Amos, who alerted me to a recent initiative by Israeli diplomats to sue Iranian President Ahmadinejad utilizing the International Court of Just in The Hague.  What are they prosecuting him for?  For conspiring to commit crimes against humanity and genocide. I’m not sure whether Ahmadinejad would sit for such a trial, but I definitely commend the effort!

Check out the wording on the Convention on the Prevention and Punishment of the Crime of Genocide, which was accepted by the UN General Assembly in 1948:

The diplomats believe that Ahmadinejad’s many comments calling for the destruction of Israel constitute a “direct and public incitement” to commit genocide, and I’m not sure exactly how any rational person could controvert that. They also point to Iran’s open support of Islamic Jihad, responsible for the recent terror attacks in Israel, and Iran’s recent push to acquire nuclear weapons.

If such a trial were to occur, I doubt Ahmadinejad would attend, and also doubt that he would accept any consequences dealt out by the court.  Today, Iran sees itself in conflict with the West, and as such refused to live by rules created by the West. But I believe that even going through the motions of such a trial are beneficial, if for nothing else then because it truly illustrates the criminality of Ahmadinejad’s words and actions.

From Sex to Science, Bondage to Bird Pictures, And...
Liberal Pundit Dodd Throws Name into Presidential ...
The Radio Show, Graduation, A Raffle, and an Ode t...
Attorney General Gonzales Denounces Freedom of the...
Ray Nagin Secretly Targeted by Party Leader Howard...
Only a few hours to go until the first experimen...
That's right, folks, I'm coming out of retirement...