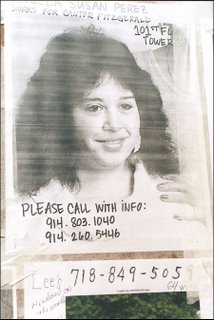 D. Challener Roe began a project called 2996, where volunteer bloggers would each write a tribute to a single victim of the 9/11 attacks. I’m honored to be a part of the project, and to honor Angela Susan Perez.

Angela Susan Perez was a 35-year-old clerk for Cantor Fitzgerald, and a single mother of 3 children. She lived with her sister Donna, 45-years-old, and her eldest niece, Kelly. She had a regular boyfriend, Carlos Castillo, and many friends, and was remembered for her honesty and directness. Her niece, Kelly, had this to say:

You were the aunt that took us to PS 8 park, brought home big giant coloring books, gave us nicknames that made us cry (and laugh!), danced with us to Footloose, came as the chaperone on class trips, (and let unruly boys let them know what they were!) , told us not to suck our teeth at you! :)

You were afraid of a rubber bat and you hated having your picture taken. You had a distinct laugh and unique sense of humor, a love of life and the people you knew were most important in that life. Remember that picture of Bo in the closet when we shared a room? And that pink brush I was never allowed to use?? Remember how I snuck out of the room when I saw someone kissing someone else and was so upset? And you made me feel better? Thanks.

You were a Yankees fan, a Rangers fan, a Carlos fan! I loved embarrassing you on train rides. You always kidded about being the favorite aunt because you were the only aunt... that was never the only reason.


Angela was from the Bronx, and lived there until September 11th, making the site of this tragic event her back yard. She was a regular person like you and I, just going to her job on a September morning, having done nothing to deserve her fate. But deserve had nothing to do with what occurred in New York that day. Her friend James Price said this about Angela:

It was a long time ago. Too long. I lived in the shadow of the World Trade Center just across the Hudson. You lived in the Bronx. We were best friends. We were Yankee fans. We worked together. We spent our free time together. Looking back, I remember that I could never get my lips to speak the words that were in my heart.

I love you, my friend from so long ago. I have thought about you almost every day of my life. Now I will miss you for the rest of my life. My deepest sympathies go out to Susan's family. She was one of the best things that ever came into my life. I will always be grateful for our brief time together.

In Legacy.com, where I found the most information on Angela, there were two pages of kind messages from people whose lives were touched by her. One of the most touching messages was from Frank Fitzsimmons, also of the Bronx:

You will be missed. God must have wanted someone who could make him laugh up in heaven, so he picked you. We all have great memories of you, birthday dinner, Christmas, picking you up downtown with Carlos (we won't go into details...:) Whenever someone says SUSAN it brings a smile to my face. May God bless you and keep you in his arms forever.

Yes, the list of people taken in this attack include the movers and shakers of the New York business community, it includes heroes from the Fire and Police department, and great people innumerable.

But we have to take a special moment to remember the victims like Angela Susan Perez. There are no long eulogies in the papers for her, and no spectacular marble tombstones on websites for her like there are for some of the other victims. But her loss is immeasurable. It will be felt in the lives of her sister, her nieces, her children, and her friend. It will be felt in the lives of all those lives Angela touched, and can no longer touch again.

Today I honor Angela Susan Perez, on the 5th anniversary of her murder at the hands of terrorists during the September 11th attack on the World Trade Center. Her life is a real indicant of the tremendous loss our nation experienced on that day, and the wounds that will never heal. Remember her with me, and honor the contributions she made to this country and the world.

Are You Ready For Some Football?
Radio Show Tonight at 9pm EST
Inspiration and New Beginnings: Can You Feel It?
The Minimum Wage: Don't Fix It Though It's Broken
Minimum Wage Increase Debated
New Template, Tenant, Chat Room Sponsor and BigDaw...
Hybrids Could Pay For Themselves - If Bush Lets Them
The Nomad on BigDawgRadio Tonight at 9:00 pm EST
A Night To Remember
Does Our Military Enjoy Our Freedom?